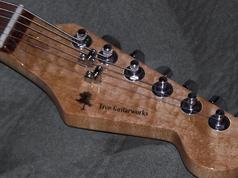 Guitar tip of the day: My guitar won't stay in tune!

This is one of the most common complaints of guitarists. Often the first impulse is to blame the tuners, but in fact, tuners are seldom the culprit.

Let's start with the most common problem, the nut. Often the slots may be too narrow, rough, or there may be something in the slot the string is getting caught on. In any case, the string isn't passing freely through the slot. If, while tuning, you turn the button and nothing happens, then you hear a ping, and the tuning changes, ...for sure the nut. Or you get it perfectly in tune, and as soon as you start playing it goes out of tune, ...very possibly the nut.

Plastic nuts found on budget instruments seem to have more problems than harder materials like bone, tusq, Micarta, or graphite (actually graphite-infused resin... pure graphite is very soft). So if your guitar has a cheap plastic nut, an upgrade could be a worthwhile investment.

Also, 3X3 headstocks, like Gibsons tend to have more problems with the G string staying in tune, because the string takes a sharp angle from the nut to the tuner. Oddly enough, the D string problems are far less common, even though the string is wound and has the same angle.

You can often fix a "sticky" nut yourself by running a very small file, or folded 400 grit sandpaper for the unwound strings, and for the wound strings, just run a length of the string through the slot. Or for a couple bucks you can get a set of torch tip cleaners (tiny wire files of assorted sizes) from your local hardware store. You can also lubricate the nut slots with products made especially for that purpose such as Nut Sauce or Guitar Grease. Chapstic or graphite (lead pencil) also work well.

If the nut slots aren't cut right, and the string action is high at the first few frets, not only does that make the guitar harder to play, but fretting the strings stretches them enough to pull them out of tune. You tune your guitar, play an A chord and it sounds out of tune, you check your tuning and it is OK... could be your nut. It could also be your fingering technique. If you are pressing down harder than necessary you can pull the string out of tune. You should be able to slide a thin (.46mm) pick between the string and first fret, and the string should hold it without raising the string. If you have more space than that, your action at the nut is too high.

Incorrectly installed strings can also cause tuning problems. There is more than one correct way to string a guitar, but here is how I do it...

First remove the old strings. Some folks think you should only change one string at a time... not so. While the strings are off is a good time to clean your fretboard and the areas where you can't reach when the strings are on. Also check your tuners to make sure they are snug. The nuts on top of the headstock or the screws on the back can become loose.

Attach all of the strings at the bridge, making sure the ball end is snug. On acoustics I reach into the hole and make sure the ball is up tight against the bridge plate, and the pins are pressed in securely.

Next, starting with the low E string, pull it taunt past its tuning post. At about 1-1/2" - 2" past (a little less for the low strings), put a sharp bend in the string, then feed the string through the post hole to the bend. Put another sharp bend on the other side of the post in the opposite direction that the string will be wound. Put the first wrap around the post above where the string passes through the post, than cross over and wrap the remainder below. Make sure all wraps are against the post. If strings begin to wrap on top of each other it can cause tuning problems. If you run out of post you left the string too long.

Tighten the strings and give each a couple of little tugs to seat everything in place and stretch the strings. Don't tug too hard on the light strings... they will break. Tune to pitch. The strings will continue to stretch for a bit, so you'll have to tug 'n tune a couple of times before things settle in.

Trim the ends of the strings to the posts..... them things could poke an eye out!

Of course if you have locking tuners, you don't have to worry about the strings slipping at the post. Just a hint about installing strings on locking tuners; allow enough slack so there is at least one wrap around the post when tuned to pitch. If you don't, the string is much more likely to break at the post if you de-tune/re-tune.

Other areas where strings can catch and cause problems are string trees and to a lessor extent saddles.

If your guitar is equipped with a vibrato system (Bigsby, Maestro, Fender "Syncronized Tremolo," Floyd Rose, etc), any tuning problem that exists is compounded, and these units can introduce problems of their own. If there are moving parts that stick it can cause problems, and there is a greater chance that the string will catch at the saddle. Roller saddles can help this. Systems that use a "knife edge" to pivot on can have problems if the edge or posts are rough or if the screws are tightened too much.

Tuners. Yes, tuners can fail, and when they do it's usually an all or nothing thing. They very seldom slip. If you don't believe me, take your crappiest tuner, firmly attach a vice-grip to the post, and see if you can get it to slip. It will break before it slips. Any "slipping" going at the tuners is almost always the string slipping on the post.

Having said that, cheap or worn tuners will make it harder to tune your guitar. If your tuners feel rough to turn, try working some light household oil (WD-40 works fine too) down along the post into the mechanism. The oil won't hurt your finish, but you'll want to wipe up any excess.

Better tuners will be smoother and more precise. So while cheap tuners will do the job, nicer tuners will make the job easier to do. If you have crappy tuners, investing in an upgrade is often worthwhile. But even the best tuners won't solve the problems mentioned above.

Finally, any time you change temperature or humidity, wood will contract and expand, and this will affect tuning. So bringing your guitar from your cold car into a warm room, or vice versa, will throw off the tuning until it stabilizes.

So now we know why people say that guitar players spend half their time tuning their guitar and the other half playing out of tune.